Publication of the first data of the Study on the sport habits of the school-age population of Barcelona, 2018 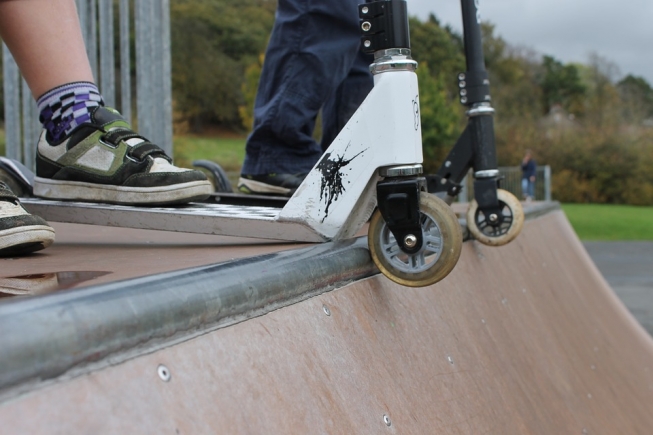 Publication of the first data of the Study on the sport habits of the school-age population of Barcelona, 2018

The presentation of the third edition (2018) of the survey of sports habits of the school-age population of the city of Barcelona was carried out last November, having been administered the survey among primary and secondary school students during the 2017-2018 academic year. The main objective of the study, as it happened in previous editions, is to know the current sports practice habits of the school population after school hours. In addition, also see what have been the trends marked in these 3 editions thus showing the evolution of the practice of physical activity and sport among the school population of the city of Barcelona.

Among the most representative data, the following stand out:

There has been a growth in the sports practice index over time since 2007 to the present. The practice index in 2007 was 66.8% while in this edition 76.1% has been obtained, thus consolidating the level of practice of schoolchildren in the city. It should also be noted that for the present edition there has been an increase in people who practice sports in an organized manner, increased from 62.7% in 2013 to 70.6% in 2018.

The female sports practice has increased by 3.1% compared to 2013 and by 14.3% compared to 2007. This means a reduction in the difference between sports according to sex. Although this approach has occurred, boys continue to present a higher practice rate than girls, 8.3% more this year. 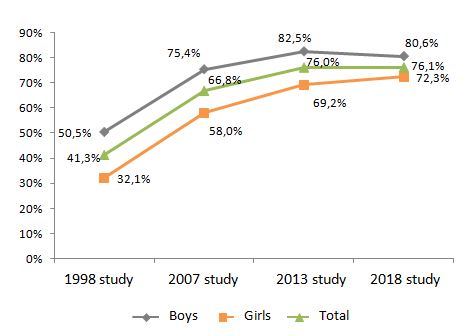 As it happened in previous editions, there is still an abandonment of female practice in the transition from primary to secondary school, obtaining for this edition a practice index of 71.7% in the first secondary courses. At a general level, in the other educational stages the indices of practice remain stable.

Organized practice: the most practiced sports in an organized manner are in this order: football (31.4%), dances (17.0%), basketball (16.0%) and swimming (12.1%), wrestling sports (10.0%), skating (5.8%), volleyball (4.7%) and tennis (3.9%). Compared to the 2013 study, the practice of soccer and swimming has decreased, while dance and wrestling sports have increased two percentage points. On the other hand, skating and volleyball have increased the percentage of practitioners passing activities such as gym/fitness and tennis.

Free time practice: Showing a behavior similar to that of organized activities, the most practiced is soccer/indoor football (27.9%), followed by cycling (25.8%), walking (23.6%) and running (22.2%). Second, there would be sliding activities such as skates, skateboards, scooters, etc. with 19.6% and gym/fitness activities with 15.0%.

The main reasons for sporting school children in Barcelona are because they like the activity (89.1%), they want to compete and play games (36.1%) and to be fit (34.4%). In the two previous editions, of 2007 and 2013, the motivation of 'to be in shape' was the second most outstanding but in this edition, due to the increase in the practice of competition, schoolchildren have shown more interest in the reason for participating in competitions.

Reasons for not practicing sports

Regarding the reasons for not practicing sports, for this edition the main ones indicated by the group of schoolchildren have been: not having enough free time and doing other activities (18.7%). Secondly, because they have to focus on studies (13.3%) and, thirdly, for the money it costs to play sports (11.8%).

From the percentage of schoolchildren who do compete, the following results emerge: in boys, the practice of federated competitions predominates (65.9% versus 49.0%); and, on the other hand, in school sports games the participation of girls is higher (with 58.8% versus 42.8% of boys). It should also be noted that participation in school competitions is higher in elementary courses than in high school courses, a situation that is reversed in secondary school and represents an increase in the practice of federated competition.

The most relevant conclusions that can be drawn are the following:

The data obtained in the study allow a photograph of the sports framework in the school population, becoming a tool to reinforce and promote educational and grassroots sports in the city of Barcelona.