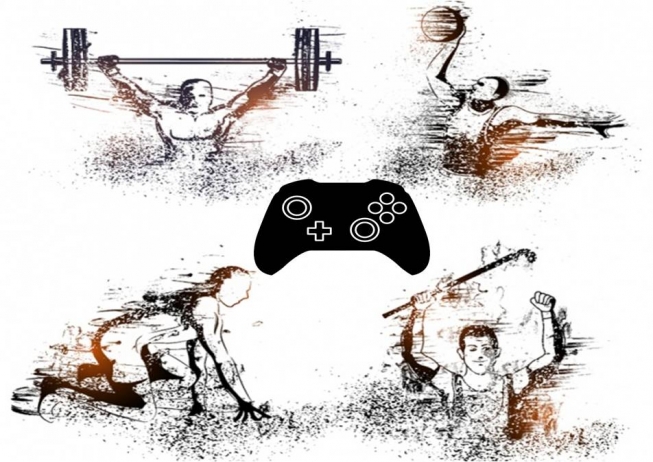 Continuous technological advances have caused a change in trends in sports consumers towards more digital platforms. In this new framework, digital rights will take on special relevance in the sector in the next 3-5 years. If, in addition, the exponential growth of the global phenomenon of E-sports is taken into account, it becomes clear that the sports industry has to rethink the way forward if it wants to continue growing.

The advisory team in sports businesses of Pricewaterhouse Coopers (PwC), conducted a survey during the months of May and June 2018, in which it asked the main world leaders of the sports industry what was the current state and where the sports market is going. The conclusions that were drawn from the results suggest that the market will continue to grow steadily despite the fact that, at a general level, it will do at a lower rate than in the last 3-5 years. In Asia, the Middle East and Africa, but a more optimistic forecast are expected and this growth will continue to accelerate as shown in the following graph. 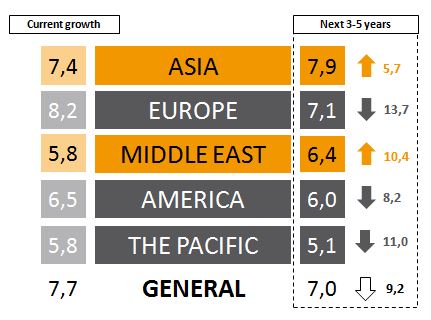 Respondents noted that a change in consumer behavior had been identified in recent years. The younger generations seem to tend to abandon traditional sports consumption through television and opt for the use of a multitude of digital platforms; in addition, they often do it in more than one way simultaneously. This supposes, on the one hand, an increase of the difficulty for the brands to maintain notoriety, but at the same time a great opportunity since they increase the possibilities of sending their message through more channels.

This change in consumer trend can also be reflected in the growth potential of the digital rights segment that respondents believe will be 11.5% in the next 3-5 years. This growth supposes an increase 3,5 times superior to one of the segments of the television rights and, therefore, is a factor that the market will have to take into account. So, what will be the predominant contents and by what channels will they be consumed?

It seems that millennial consumer preferences go through access to “mobile, short and online” content through their Smartphone’s and tablets as indicated by the main industry leaders. They prefer to see the highlights before, during and after the desired competition or event, in contrast to the more adult generations who continue to prefer watching live content and “full match” on television. In the following graphs, extracted from IRIS Intelligence Ratings analysis data you can see the sports contents that will be consumed the most in the next 3-5 years, and this change in consumer trend, specifically with data from the monitoring of the first leagues of Europe football during the 2016-2017 season. 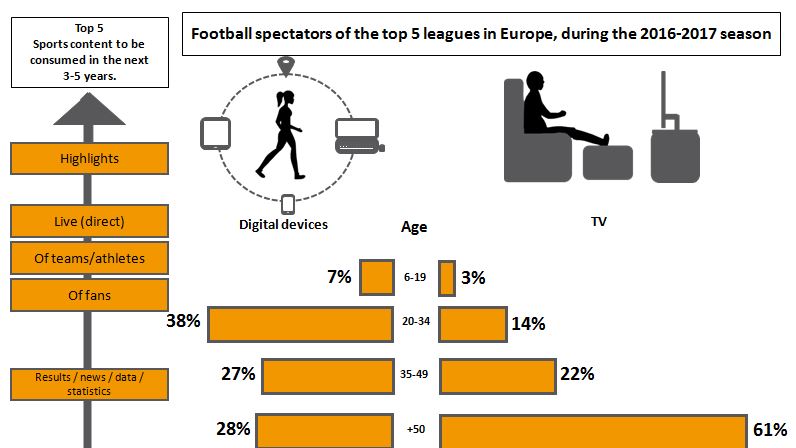 Respondents are clear about this shift in millennial consumer trends towards more digital media that is taking place. Now, what will be the main actors in the field of digital rights in the sports market, and how will they be done to achieve the desired ROI (Return Where Investment)? According to respondents, in the next 3-5 years, companies such as Amazon, Google, YouTube, Facebook, DAZN or Alibaba will take on special relevance, which is betting strongly on acquiring the digital rights of sporting events and competitions. The e-commerce giant, Amazon, already began to open ground in June, is the first non-traditional station to acquire a package of the rights of the EPL (English Premier League) for the 2019-2022 seasons as a market positioning strategy sports. This, according to experts, will provide you with the possibility of experimenting with several monetization models by placing yourself one step ahead in the market, until the next auction of the Premier League rights scheduled by 2021, being aware that the main factor of Revaluation of digital rights will be the fact of not entering into traditional payment systems.

Even so, during this period you can collect and analyze data that will allow you to better focus on your customers and thus increase the number of subscribers and sales. YouTube also wants to position itself and, since February, it already broadcasts live sports content related to the NBA (National Basketball Association), the MLB (Major League Baseball), the UCL (UEFA Champions League), the EPL (English Premier League) , the PGA (Professional Golfers Association) and the United States University Basketball League, online content that adapts to the current consumption trend with its streaming service. One of the Social Networks, Facebook, has also opted to position itself in the market with the acquisition of the rights of professional football competitions to India, Asia and Latin America. This fact has allowed it to increase by about two million users worldwide, with the amount of data that this entails and the benefits that it can extract through advertising. For its part, DAZN has also acquired rights, mainly, in Italian boxing and soccer and already offers streaming content with Cristiano Ronaldo as the main ambassador.

Currently, but there is still no consensus on what will be the growth path of the sports rights market since this change in consumer behavior towards digital platforms will vary the traditional income streams and this will cause the need to rethink the price systems and current rates. The big technology companies but they are clear that offering personalized content will be a key factor to connect with the younger audience, and they are already positioning themselves, suggesting an optimistic future.

The conclusions are drawn from the results of the survey also suggest that a new challenge that now arises for the Sports Industry is to combine marketing strategies with sponsorship in real-time. The understanding of what, when, how and where the client wants to consume and how much he is willing to pay are key aspects to be able to offer a service, product or personalized content that connects with the consumer and allows to achieve profits as a result of the marketing actions carried out. Still, 56.3% of the top executives of the sponsoring companies still do not fully believe in the importance of real-time interaction with the consumer, for the moment, they faced 35.4% who already do.

The interaction in the digital field generates a large amount of data that the possessor companies can use to create customer profiles and thus orient their products and/or services in a personalized way and in real-time to the consumers. According to the respondents, the industry strategy will have to pass to use non-traditional payment systems through the transformation of all this information into benefits with new payment methods adapted to the consumer, mainly through advertising. Some shoe brands (Nike, Adidas, Under Armor or Big Baller) are already developing innovative ideas through the NBA 2K video game franchise, where there is the possibility to customize players with sneakers of these brands and thus cause a connection with the consumer through his favorite video game developing a feeling of loyalty with the brand.

And with E-sports, what is happening? Where is this phenomenon heading? You can find out in the second part of this article that it will be published soon!